Fiji is one of the world’s top 10 dive destinations, with healthy soft coral reefs wowing divers with an abundance of brightly coloured fish as well as thrilling shark encounters. Fiji enjoys the tag “Soft Coral Capital of the World”, and is deservedly rated as one of the top 10 dive destinations in the world. When you dive Fiji, you delve into a vast, varied and colourful underwater playground that boasts something spectacular for divers of every skill level… breathtaking hard and soft corals, wall dives, caves, grottos and shipwrecks. Fiji’s remarkable marine life embodies all the elements that make diving Fiji’s reefs so exceptional. 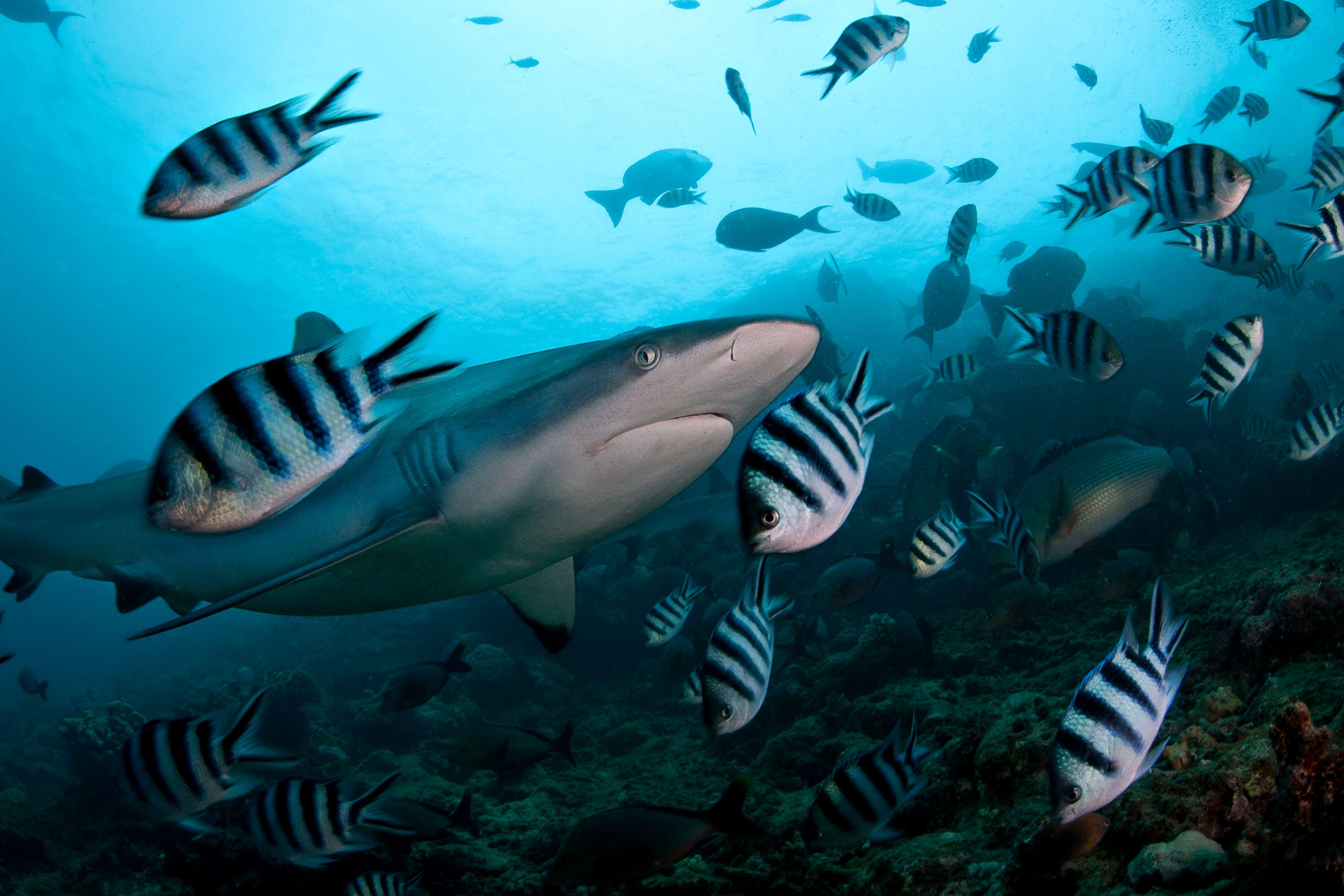 Beqa Lagoon
Plenty of pinnacles, bommies and even a wreck or two to keep you enthralled. 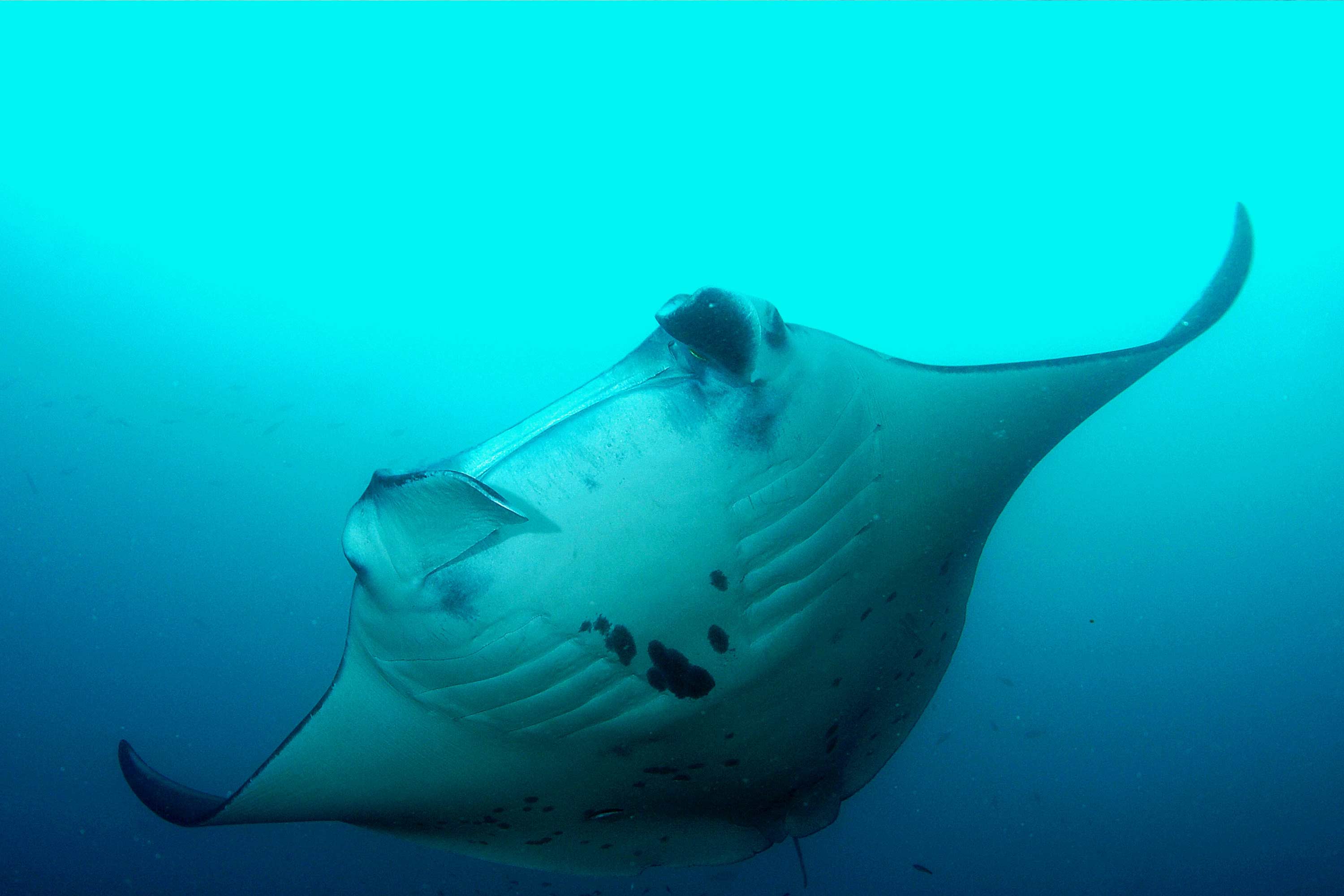 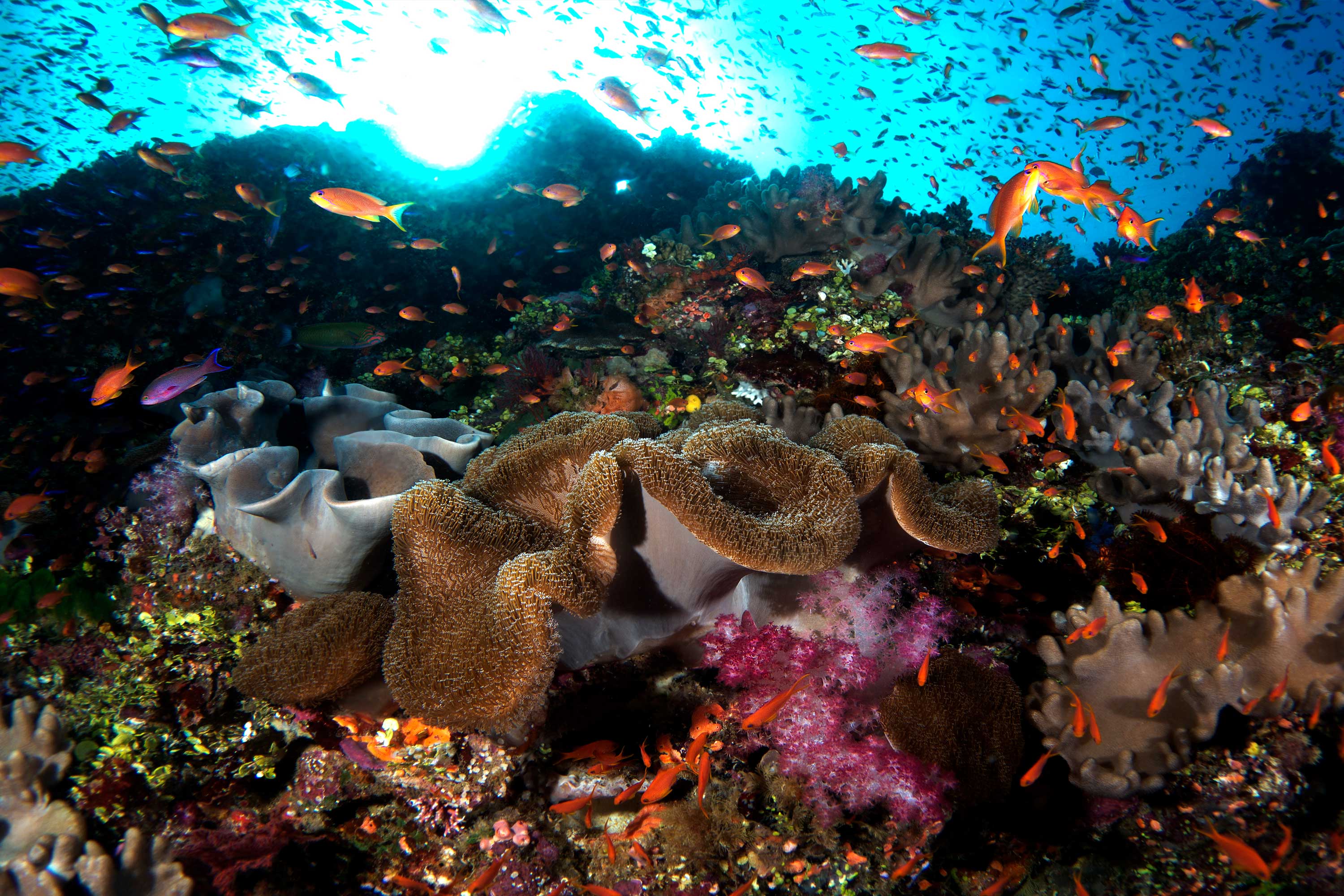 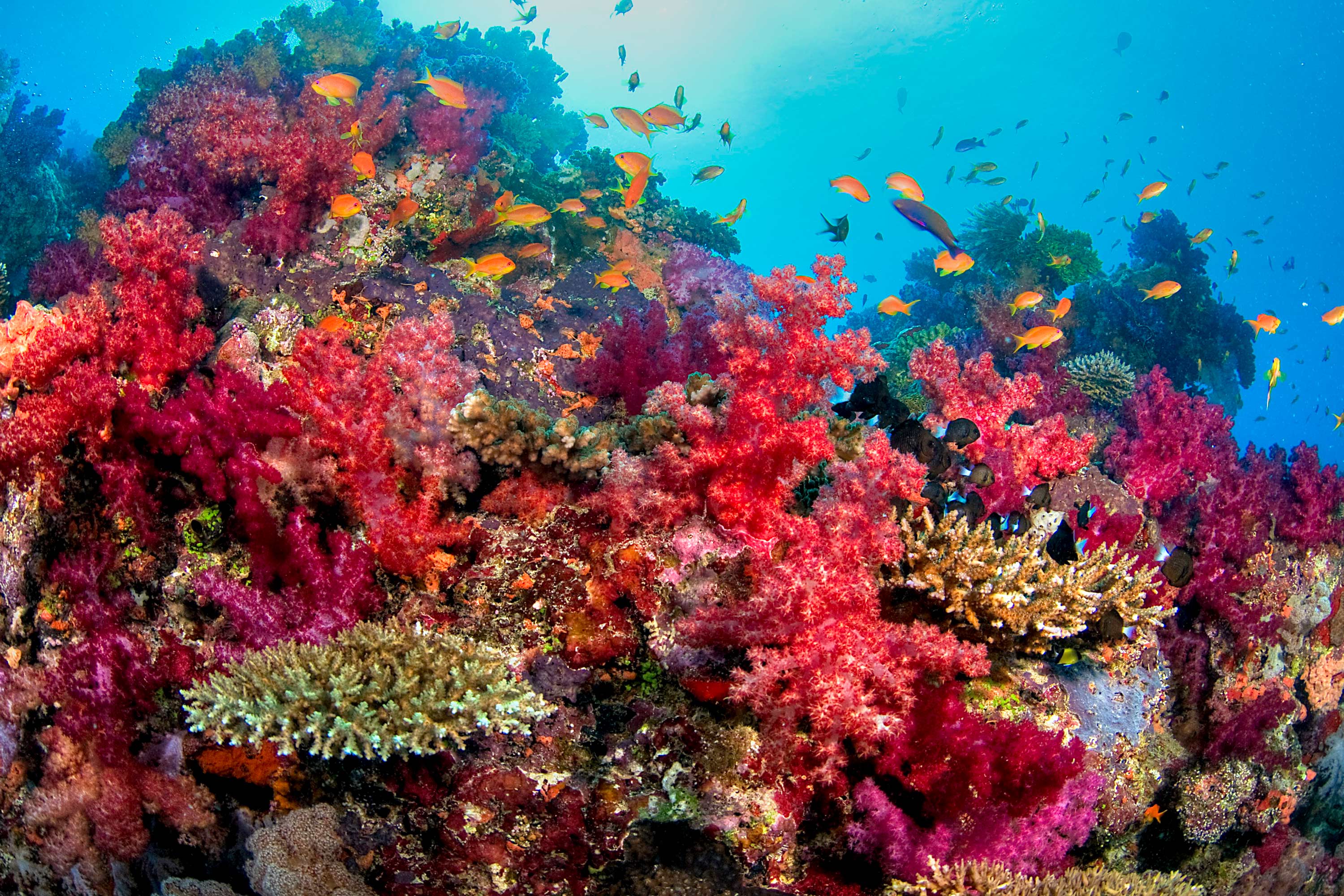 The Fiji archipelago is at the cross roads of the South Pacific. In the days of sailing ships it was known as The Cannibal Isles and carefully avoided by mariners because of its fierce warriors and treacherous waters. However, in the age of jumbo jets and global travel. Fiji has become the central hub of the exotic South Pacific.

The Fiji islands are situated in the South Pacific, midway between Melanesia (Solomons, Vanuatu, New Caledonia and Papua New Guinea) and Polynesia (Tonga, Samoa, the Cooks and French Polynesia). They are south of the equator, just north of the Tropic of Capricorn and west of the International Dateline. The territorial limits enclose an area of 1.3 million sq km (half a million sq mi), but only 1.5% of this is dry land. About 300 islands make up the nation.

Taveuni and Kadavu are also substantial islands, but the rest of the country is made up of small islands divided into the Lomaiviti, Lau, Moala, Yasawa, Mamanuca and Rotuma Groups. Many of these islands are relatively untouched and there are many beautiful reefs, lagoons and harbours, as well as natural vegetation.

The vast majority of Fiji’s land mass is volcanic in origin, with some reef-formed limestone and coastal sedimentary formations. The major islands are generally mountainous in the interiors which creates a rain shadow effect. The western sides of Viti Levu and Vanua Levu are drier and less thickly vegetated than the eastern areas. The difference in the rainfall between the two sides is striking. The eastern side of Viti Levu, where the capital city of Suva is located, averages 300 cm in precipitation whereas in the western side where Nadi International Airport is found, averages about 165 cm. Thus on any given day, your chances of getting wet are much greater on any of the larger islands’ eastern sides, rather than in the west.

The ocean environment includes coral reefs, lagoons and deep pelagic areas all of which team with fish. As many visitors can attest to, Fiji’s reputation as a world-class dive destination is well deserved. In Fiji’s rich reef system one may find a multitude variety of marine life all within a few square meters.

According to Fijian legend, the great chief Lutunasobasoba led his people across the seas to the new land of Fiji. Most authorities agree that people came into the Pacific from Southeast Asia via Indonesia. Here the Melanesians and the Polynesians mixed to create a highly developed society long before the arrival of the Europeans.

Fiji was first settled about three and a half thousand years ago. The original inhabitants are now called “Lapita people” after a distinctive type of fine pottery they produced, remnants of which have been found in practically all the islands of the Pacific east of New Guinea, though not in eastern Polynesia. Linguistic evidence suggests that they came from northern or central Vanuatu, or possibly the eastern Solomons.

Before long they had moved further on, colonising Rotuma to the north, and Tonga and Samoa to the east. From there, vast distances were crossed to complete the settlement of the Pacific, to Hawaii in the north, Rapanui [Easter Island] in the east and Aotearoa [New Zealand] in the south.

Unlike the islands of Polynesia which showed a continuous steadily evolving culture from initial occupation, Fiji appears to have undergone at least two periods of rapid cultural change in pre-historical times. This may have been due to the arrival of fresh waves of immigrants, presumably from the west.

Europeans
The European discoveries of the Fiji group were accidental. The first of these discoveries was made in 1643 by the Dutch explorer, Abel Tasman and English navigators, including Captain James Cook who sailed through in 1774, and made further explorations in the 18th century.

Major credit for the discovery and recording of the islands went to Captain William Bligh who sailed through Fiji after the mutiny on the Bounty in 1789. The first Europeans to land and live among the Fijians were shipwrecked sailors and runaway convicts from the Australian penal settlements. Sandalwood traders and missionaries came by the mid 19th century.

The Fijians were described as formidable warriors and ferocious cannibals, builders of the finest vessels in the Pacific, but not great sailors. They inspired awe among the Tongans, and all their products, especially bark-cloth and clubs, were highly esteemed and much in demand. They called their home Viti, but the Tongans called it Fiji, and it is by this foreign pronunciation, first promulgated by Cook, that these islands are now known.

After the explorers, other Europeans followed. For over half a century, Fijian culture enjoyed what has been called its ‘golden age’, as tools and weapons brought by traders were turned by resourceful chiefs to their own advantage.
Canoes and houses were built, confederations formed and wars fought on a grand scale without precedent. Gradually and inevitably however, the Fijian way of life was changing. As Christianity spread in the islands, wars ceased abruptly and western clothing was adopted. Cannibalism practised in Fiji at that time quickly disappeared as missionaries gained influence. When Ratu Seru Cakobau accepted Christianity in 1854, the rest of the country soon followed and tribal warfare came to an end.

From 1879 to 1916 Indians came as indentured labourers to work on the sugar plantations. After the indentured system was abolished, many stayed on as independent farmers and businessmen. Today they comprise 44 per cent of the population.

After Fiji was ceded to Great Britain in 1874 epidemics nearly wiped out the population and it seemed as if the natives were doomed. But the colonial government took the Fijians’ side.

Land sales were forbidden, health campaigns implemented and the population picked up again. Theirs was not, of course, the culture of the heathen ‘golden age’, but one modified by the new religion and increasingly the new economic order. Yet in today’s Fiji, independent since 1970, a surprising amount has survived.

20th Century
The 20th century brought about important economic changes in Fiji as well as the maturation of its political system. Fiji developed a major sugar industry and established productive copra milling, tourism and secondary industries.
As the country now diversifies into small scale industries, the economy is strengthened and revenues provide for expanded public works medical services and education.

The country’s central position in the region has been strengthened by recent developments in sea and air communications. Today, Fiji plays a major role in regional affairs and is recognized as the focal point of the South Pacific.

A cooling trade wind blows from the east southeast of most of the year. It usually drops to a whisper in the evening and picks up again by midmorning. Fiji has a climate ideally suited for the outdoors, the beach and surf, for light cotton dresses, barbecues and water sports.